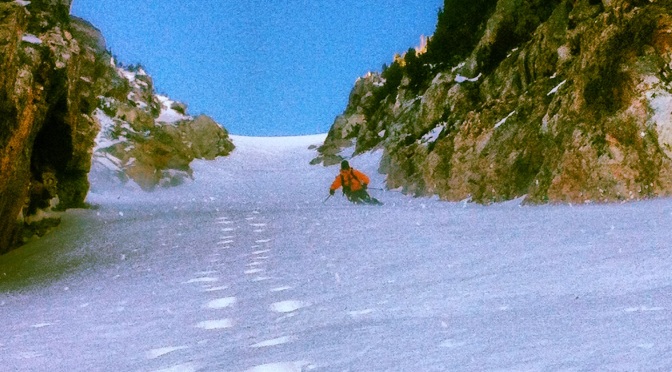 My brother, Dane, and I were long overdue for an adventure in the park and decided on a relatively easy and safe adventure considering the conditions.  After an aggressive 2012-2013 winter that saw us ski numerous couloirs and peaks, we had a very slow start to the season and were both eager to get into the park.  We started at around 7:30am and made quick work of the tour to Bradley Lake  We crossed that swiftly and continued on to our right, working our way up the moraine that separates Garnett Canyon from Disappointment Peak.  We continued up and to the right for a while after the moraine, eventually finding a skin track that followed the summer hiking trail.  We continued on that for a bit, and eventually found ourselves crossing through a massive whitebark pine stand toward the culmination of the skin.  We benched out around Surprise Lake and continued up another 300ft to Amphitheater Lake at around 9:15am.  Once there, we were encountered with our first sight of the aptly named Spoon Couloir at the western end of the lake.  It rises about 1100′ from the lake, but 400′ of that is the runout from the couloir.

We made our way across the lake and eventually found ourselves looking up the couloir, unable to skin any longer.  We took a quick break in a safe spot to the left of the couloir entrance and switched over from skin mode to bootpack mode.  We stayed close the whole way up the couloir, switching out the leader on several occasions, thus keeping us fresh the entire bootpack up the couloir.  The snow was variable, with areas of hardpack, mixed in with wind pockets of soft snow.  Considering the temperature of the day, roughly 10 degrees F, and avy conditions, we felt pretty safe in the exposed couloir.  Once reaching the top of the couloir, we kept right and continued up the steep entry pitch (50 degrees) and made our way toward the summit of Disappointment Peak.  500′ from the summit, we decided the snow was getting to thin for a summit bid, so we stopped for a quick break and transitioned into ski mode.

We skied down to the entrance of the couloir and decided on skiing it in three sections, with two stops at relatively protected points along the skiers right of the couloir.  I dropped in first, making some “powder” turns on the wind pockets, while they broke apart and funneled down the couloir.  I stopped and waited for Dane to make some fun turns down the 50 degree entrance to the couloir.

We continued down the couloir, switching up the lead until we reached the bottom of the true run.  It was decent snow all the way down, but considering the northeasterly aspect, I was hoping for better conditions.  We did get some fun turns down to Amphitheater Lake and then were greeted with some amazing powder fields on our way down to the moraine of Garnett Canyon and Disappointment.  As with many trips into the park, the run out to the valley floor can sometimes be the most fun, and todays snow didn’t disappoint down low.  For me, the trip was a real treat, considering that Dane and I had not spent much time in the park and I hope that it was only the start of a great season.

One thought on “Spoon Couloir”