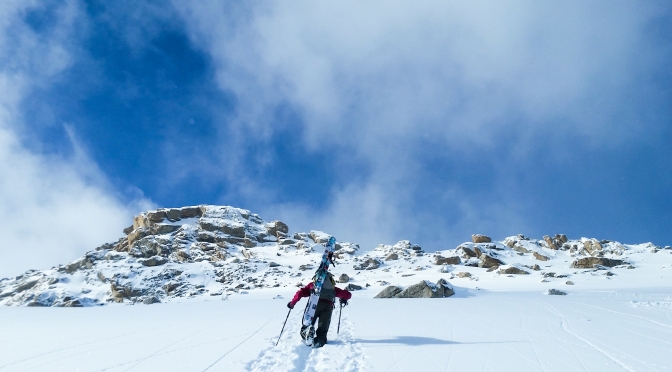 Took a little weekend trip up the Spoon Couloir with Zelie to check out the snow and get her into an area she had not skied this past Saturday.  The Spoon Couloir is a nice test piece for those looking to graduate from the smaller lower faces to more committing lines, without really scaring yourself.  It also offers some great views of the surrounding mountains and some pretty fantastic “face skiing”.  I have been up the Spoon a few different times, writing my first trip report about it, and must say I do like skiing this couloir a lot.  It is: relatively easy to get to, the East Face of Disappointment is a blast, the couloir is steep and you have numerous ski options once you get to Amphitheater Lake.  That being said…this was the best skiing I have had in the couloir to date.

We left Bradley/Taggart at a casual 9:45am and cruised over to the Disappointment Peak skin track.  Making it up to Amphitheater in a little over 3 hours (the skin track was pretty awful), we could see two groups of 2 going up the couloir.  Now, it’s always a bummer to not get first tracks, but considering the time we left and that it was the weekend, I couldn’t really be disappointed.

We slowly worked our way up to the start of the climb, hoping that the two groups would make quick work of the East Face and ski through before we got to the transition point.  Unfortunately, this did not happen.  We changed over to boot pack mode and waited 15 minutes in the shade, assuming that the skiers ahead of us would be coming down any minute.  Finally, we got cold and decided that the snow conditions did not warrant that we wait until the couloir was “open”, even if it may “taint” someones skiing zen.  As we predicted, about 2 minutes into the climb – the first group came skiing through.  We moved to the side and said hello as they skied through.  I asked if the second group was going to be coming down soon and the skier said it looked like they were about to ski.  So we worked our way up keeping an ear above for the remaining group, but didn’t see them until we hit the East Face.  They said hello and we continued to work our way up the face, wondering what had taken them so long, but not really concerned with it.

It was getting a little late, so the summit of Disappointment was not in the cards for the day, but we climbed until it turned rocky and got ready for the ski.  With the temperature just right and the wind calm, we soaked in some rays and took in the views from this beautiful perch in the park.

After a short while, we decided to do what we came to do….ski some powder and took it down the East Face.

After skiing the face, we worked our way down to the entrance of the couloir.  Based on the snow conditions, I opted to enter from the middle, over the rollover, while Zelie came in from the right.  The few steep turns I got in this section were definitely the best of the day and I had a blast skiing into the Spoon from the top!

I pulled out about 300′ down on the right and let Zelie ski the entire couloir in one push.  The snow was deep and stable, not sluffing or moving at all the entire time we were in the chute.

After making it through the couloir, we made some powder turns down to Amphitheater Lake.  After crossing the lake, we contoured left to a little shot that drops you into Delta Lake and Glacier Gulch.  I am not sure if it has a broname, but I have looked at it a few times while crossing the Delta Lake and thought it would be a fun variation to the run.  The snow in this north facing chute was great and we milked the turns all the way down to Delta Lake.

From here, we worked our way down Glacier Gulch, finding some good snow, but also noticing it change over to a breakable crust around 7800′.  Instead of traversing right to Bradley Lake like I have always done, we decided to check out the out from Glacier Gulch for a change.  This proved to take a lot more time and effort then traversing, but I suppose if the conditions are right you can get another 800′ of skiing, which might be worth the extra effort.  Regardless, we skated back on the groomed Teton Park Road and back to the truck in around 7 hours.  It was an excellent day and great opportunity to get the lady into a zone she had not skied.  It also was an opportunity for me to scout the conditions for a trip that I was planning to the northern end of the park.  More on that later…..