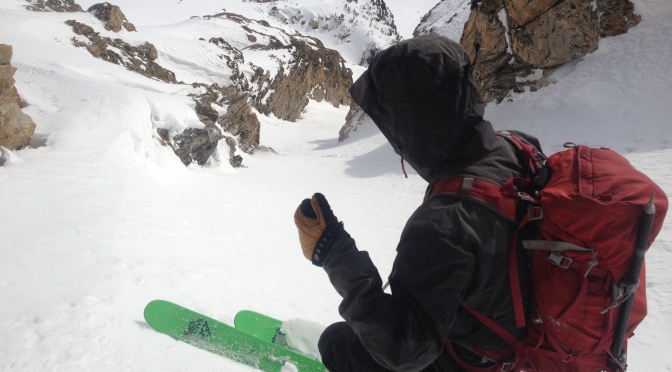 Stu, Tristan and I decided to head out on Sunday for a tour into the high country of Grand Teton National Park. We had a few things in mind that we felt would be fun skiing and within reason, but we didn’t really finalize the objective until we reached the parking lot at around 7 am Sunday morning. Having just skied the Red Sentinel the day before with Lexie, I felt that the south-facing aspects would hold some of the better snow. There was a decent wind event that came through the area early in the weekend that ended up creating some tough wind packed snow conditions on most aspects, especially the northern ones. Upon dropping into Glacier Gulch on Saturday, I noticed that there were two tracks down the South Couloir off of Teewinot. They looked pretty good and this is a line that I have been eyeing for a long time. With this in mind-and a pretty good photo of the line, our objective was set and we were off.

We made okay time getting up to Delta Lake, which has one of the more beautiful views in the park. Climbing up the moraine, we continued to gain elevation. There was a light cloud cover and a consistent breeze, which helped with the warming.

After switching over to booting shortly after the photo above, we had a decision to make. The bootpack set by the two who skied the South Couloir the day before went up and to the left.  We knew we had to go right in order to make it across the lower snowfield below the South Couloir. After following the boot pack a bit we realized that setting our own would cost us too much time and we felt that these guys would eventually go right up around the next rock band. Turned out the bootpack we were following didn’t go right and we were too high to make it onto the snowfield/into the South Couloir. So we continued up, setting our own booter up the SW Couloir, onto the shoulder of Teewinot.

It was getting late when we topped out of the SW Couloir and felt we didn’t have enough daylight to chase down the upper entrance to the South Couloir.  We decided to ski what we climbed–the SW Couloir to the snowfield below the South Couloir and then ski the two exit couloirs back down to Delta Lake. So that’s what we did. And it was great! Decent snow, somewhat technical steep hardpack snow, to some breakable crust, down to some soft powdery snow below 7,500 feet. Great skiing all around and another fun day out in the mountains.