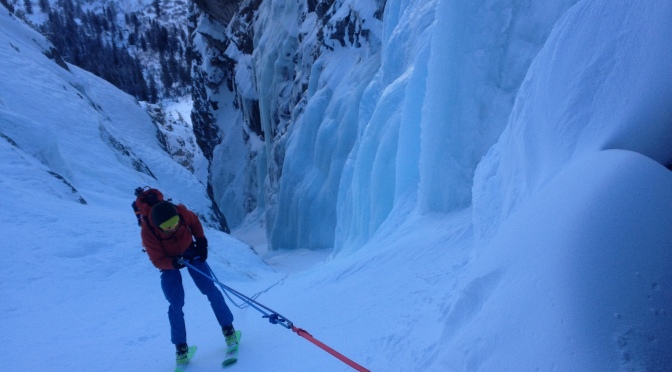 After being told I could either have New Years Eve off or I could come in and shovel snow off a metal roof in sub degree temperatures I decided for the former and a ski tour. Zach Simon was quick to get back to my text with some ‘solid beta’ on Apocalypse and after thinking about it for a while I was in. Apocalypse is a very committing ski line and it is not something to take lightly. With the current state of these persistent weak layers lingering throughout our snow pack, I am cautiously deciding on the next ski line. But with the information that Zach had received and the knowledge of the area I felt the snow was safe in there and we would be able to manage the terrain. Zach had already had Tanner on board and with the call from me that afternoon the plan was set.

We got to Death Canyon parking lot an hour before sunrise and the temperature read -21 degrees. Cold! After leaving at 7 am, we were soon warm enough and cruising up towards the Phelps Lake overlook. Took the skins off and after a quick ski we were down at the base of the canyon and back into the arctic cold. By the time we put our skins back on, Zach and mine had lost their stick and we were struggling with them the rest of the skin up! A recommendation: put your skins in your jacket to keep them warm when transitioning!

It took us four hours from the truck to reach the top of the couloir. The air was crisp and the sun was warm. It was nice to have a skin track already set which made all the extra weight a little more bearable. With a slow transition into rappel mode we geared up and were soon dropping into the cold and ominous Apocalypse Couloir. We brought up two ropes, one 60m, one 70m, both 8mm Dry Coat. It really helped expedite the rappels and made for two double raps up high and one on the exit through the ice bulge area.

The snow was pretty good in there. There was a variety of snow: some hard packed caulk, mostly old bed surfaces where it had flushed out on, there was some soft newly deposited cold smoke and there was some wind packed breakable crust that made things interesting. All in all it was skiable, but somewhat slowly caution skiing was in store. With the early season snow, everything felt tight, compacted and the skiing was steep!

We opted for a double 60m rap on the exit to speed things up a bit. It worked out great and we’re back skiing in no time. There was a v-thread about 30m down if you opted for a two rap out. The skiing on the exit was great and the apron opened up with some solid powder turns all the way down to the steam.

All in all, it took us 8 hours from car to car. I think we could have done it faster without the frozen skins, but it was a solid day out skiing one to the more enjoyable and exciting lines the park has to offer.