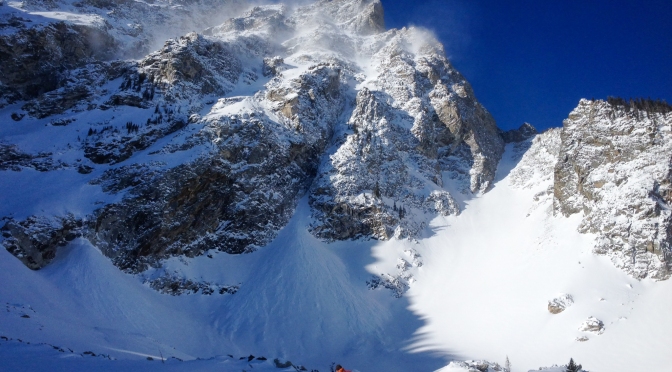 The Sickle Couloir is a major ski line off Mount Moran, with slopes maintaining a consistent 40-50 degree pitch and numerous rock bulges towards the bottom of the run that often require rappels.  It is a line I have been longing to ski for a few years and a definite on the “hit list” for this year.  It tops out around 11,800′ on a north shoulder of Mount Moran and continues down to a cirque at 9000′.  It has hang fire from above, is a “no-fall-zone” and one of the prettiest lines in the park. With all this in mind; Dane, Tristan and I woke up on Wednesday morning (after skiing the Southeast Couloir off Bivouac Peak just the afternoon before) at 5am to give it a go.  In hindsight, 5am was too late.  With the light of the moon and proximity to the run, we should have been moving at 4am, but the -10 degree temperatures gave us second thoughts about an alpine start.  Nevertheless, we awoke and tried to boil some water after a fitful night of sleep.  We moved slowly and before we knew it, we were leaving camp at 6:30am.

From our camp, the cirque below the entrance to the Sickle Couloir was around 2300′ of elevation gain and 1.5 miles of skinning.  This should have taken around 2hrs, but instead we immediately ran into some problems.  The first and major issue was our skins.  Instead of sleeping with them in our bags, we left them inside the tent thinking they would be fine.  This wasn’t a problem for Dane, who had new skins, but Tristan and I soon found that our glue was too cold to actually stick to our skis about 20 minutes into the skin.  With the sun behind a moraine, our only option was to try and make it work with the skins sliding all around unattached to our skis.  After numerous disastrous switchback, we decided to pull the skins and put them in our jacket to try and warm the glue while we bootpacked up the moraine.  This lasted about 20 minutes, until the constant postholing became too much and we tried to put our skins back on, hoping the glue was “alive” again.  Unfortunately, the skins didn’t stick and we were left in the same spot 4 switchbacks and 20 minutes ago.  The good news was that the slope had mellowed a bit and we could make due with the garbage skins until we found some sunlight to thaw the glue out.  About 1000′ from the cirque, we found some good morning light and were able to let the skins warm in the sun to a point where they would adhere to the skis.  This took around 15 minutes and we were soon hustling to make up all the lost time, calculating that we would be skinning across the lake in the dark if something didn’t change.

After about 45 minutes, we came into view of the cirque, but I had another problem. My foot had gone numb a while ago (which is normal for me), but now that numb foot was having shooting pains that caused me serious issues.  I thought that I must have some form of frostnip developing and knowing the entire couloir was in the shade, decided to stop in the sun and try and apply some foot warmers before the climb.  This was a first for me, but I would rather not continue on, than get frostbite and have serious issues lingering for the remained of the season, or even worse.  So my stop caused yet another delay and after I was finished, tried to catch up the Dane and Tristan who were working their way up to the start of the climb.  As we came into the cirque, you could see the wind was howling up high.  Mount Moran was alive with spindrift, a large contrail trailed off the summit and all of a sudden BOOM!  A large “sluffalanche” came crashing down into the cirque off a 100′ cliff.  The remnants of this failure kept coming off the cliff for 30 seconds.

Then a massive gust of wind came off the mountain, blowing snow everywhere and creating a near whiteout.  This gust lasted for a bit, but the wind lingered with several other gusts over the next few minutes.

All the while, Moran was demonstrating her might, releasing “sluffalanches” off all her slopes.  While all this was happening, the three of us had to decide if we wanted to begin the climb up the Sickle Couloir.  We had come so far: skinning across Jackson Lake, spending a night in negative degree temperatures and persevering the delays from earlier in the day.  Our main concerns were: the wind chill, the poor visibility due to the wind gusts and being knocked off the mountain by a “sluffalanche” that we couldn’t see or hear racing towards us.  The decision was easy… all the signs were working against us. Today would not be our day to ski this iconic line.  We discussed this briefly, then changed over and skied some powder down to Jackson Lake and our camp.

We were disappointed, but felt good about the decision to bail.  In those situations, only one thing has to go wrong for the day to turn into a disaster – and many things had gone wrong, so when the stars don’t align, you don’t push forward.  We packed up camp slowly and tried to thaw our frozen bodies in the sun.  We took off from camp at around 12:30pm, as the wind continued to whip off Mount Moran.  We made our way out of Moran Bay and took one last look up towards the Sickle Couloir.  A large, new sluff pile was sitting at the base of the couloir.  We felt relived about our decision and that each of us would “live to ski another day”.  We made it back to Signal Mountain Lodge in a blistering 3.5 hours, just in time to grab some happy hour beers in town and reminisce about the past few days.