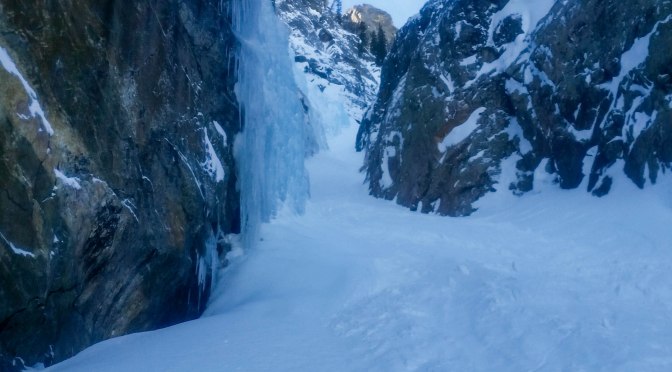 Date: 2/11/2015
Snow Conditions: 7″ of dense powder, stable with pockets of deeper snow.  Fast moving sluff, but no area of concern.

After a decent storm dropped around 2 feet of snow in the mountains a week ago, we decided it was time to get out and do some exploring.  With warm temperatures and sunny days following the storm, the northern aspects were the only areas holding some quality snow.  After some discussion, we decided on the Apocalypse Couloir.  I skied this last year in awful conditions, so was hopeful that we would find some couloir powder.  Dane, Tristan, Darren and I met at 6am in town and made our way out to the Death Canyon Trailhead.  We left the car a little before 7am and worked our way along the track.

We followed the same route up to Apocalypse Couloir that you do to Son of Apocalypse, only you proceed another 700 vertical feet or so up along the southern ridge.  Just to the left of the termination of the ridge is the entrance to the Apocalypse.

There is one large tree to the left of the entrance that the cordelette is to tied around.  The two times I have skied this line, I had to dig around for it in the snow, but it is there.  It is purple and does not show any sign of wear.  As always, I would recommend bringing along some extra webbing, cordelette and a few nuts for this adventure.  We geared up in our harnesses and soaked in the last of the sunshine before descending into the dark gully.

We rappelled off the top anchor and found a decent anchor about 20m down on the lookers right.  It consisted of 4 nuts with some webbing.  We had to make some adjustments to the anchor to balance it, but felt good about it after and worked our way down from there.  After the second rappel, we were 6m short of some purple anchors down on the lookers left (we used a 60m rope).  Here, we all should have just downclimbed in the steep snow to the last anchor, but instead everyone but myself put their skis on and sideslipped over some rocks to the anchor.

Last year, you could just slip your way down into the skiable portion of the couloir from here, but this year there was a 6ft drop with a small rock ledge below preventing that.  It was very tight at this point, barely a ski length and getting the skis straight to make the jump seemed a bit risky to me.  Tristan and Darren decided that they felt comfortable with the risk and gave the drop a go, each landing in soft snow and making a hard right turn to get in a safe spot.  Dane and I rappelled the section, quickly coiling the rope and getting ready for the skiing.  We encountered what I call “rope time” during our rappels.  When time seems to slow because of your focus, but in reality everything is taking an exorbitant amount of time.  We were all getting pretty cold standing around in the shade and were pumped to get moving.  We skied the large, mellow first pitch tentatively, checking the stability of the snow before it drops into the “elevator shaft”.  The snow was stable, soft and fun to our surprise and delight!

Before the steep rollover, we regrouped and quickly made our way down the 50 degree slope.

From here, we skied across the “main” gully of the couloir, below the Four Horsemen and took a look down into the narrows.  We couldn’t see the ice bulge (pinch) of the run from this vantage point, but were all hopeful we had had the correct beta that it was filled in and skiable.  We skied down to the pinch to inspect the ice bulge.

Standing above the bulge, we could see that it was indeed skiable.  It was at most a ski length at its tightest point, but with a little side slip we could make it through.  I “skied” down through it first, marveling at the beauty of this special spot in the park, but aware that we needed to move fast.  A runnel had formed from all our sluff, which made it even more difficult to navigate the crux, but with some careful work, I made it through, into the tight lower section of the couloir.

Everyone made it through the ice bulge safely and quickly.  The difficult part of the run was over, so we skied the lower section out to the apron of the couloir.  We did this “Canadian Style” and were sitting at the base of the couloir a few minutes later, elated to have skied such a great run.

We quickly made our way out of Death Canyon and enjoyed a few snacks and laughs in the sun before skinning up the Phelps Lake Overlook.  We made a fast exit to the truck, arriving in just over 7hrs.  It was a great day and even more special because our good friend Darren Johnson had come down from Big Sky, MT to join us on the adventure.  Hopefully he sees the light soon and makes the move to Jackson.