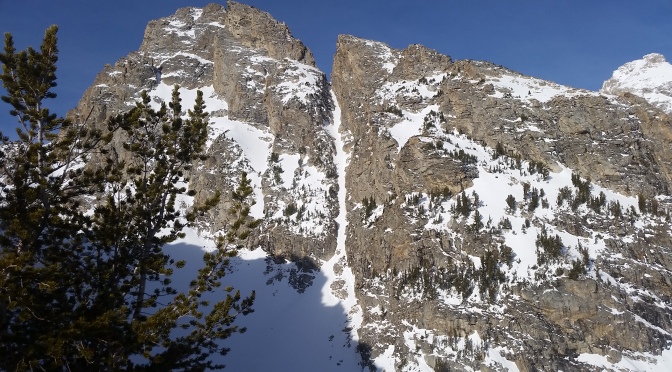 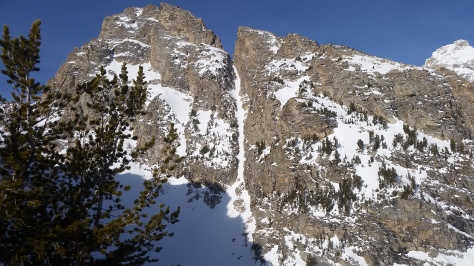 After a week long hiatus from the park, I finally made time to go out for a ski.  Dane, Noah and I decided on the Sliver Couloir, off Nez Perce Peak.  It is a good early season warmup, with a relatively easy approach and straightforward decent.  We started from Bradley/Taggart around 7:45am and were greeted with a mild inversion that made the first 20 minutes pretty uncomfortable. Once we warmed up, and gained some elevation, the day became very pleasant.

We had decided on approaching the Sliver from Shadow Peak, instead of Garnett Canyon because: Bradley Lake was still not crossable and it seems to be the fastest approach to the Sliver.  Some people like booting up the access couloir above the “Platforms” in Garnett, but after doing that a few years ago, I swore off that approach once and for all.  So, we made our way out and to the right, finding the moraine between Bradley and Taggart Lakes quickly.  We continued on the moraine for a bit, making sure not to dump right on the skin track down to Bradley Lake and Garnett Canyon.  We were at the base of Shadow Peak in around an hour and after a painless skin up (sometimes Shadow’s track can be awful), we were on top of Shadow Peak starring at the Sliver Couloir.

From Shadow, we downclimbed a mild rocky stretch to our left and made our way to the west facing couloir that takes you into the basin of Nez Perce and the entry to the Sliver.  The snow was chalky and fun all the way down the 500′ pitch, keeping speed toward the end to cross the basin, towards the Sliver.  Once in the basin, we were greeted by a frozen bootpack that looked to go to the top of the Sliver.  This was a nice surprise, even though it felt a little like cheating.  Nevertheless, we got into bootpack mode and started the 1800′ climb to the top of the couloir.  It was relatively easy on the up, only finding trouble where the sun had warmed the snow enough to create failures in the bootpack.  It took us an hour to climb up the couloir, and around 4 hours total from the trailhead.  With the climbing done, we delicately kicked out a platform in the 45 degree slope to click into our skis and ready ourselves for the ski.  We skied it in two sections from the top.  The snow was not great in the upper half, consisting of breakable crust, wind affected hardback and sun affected slush.  We all made some cautious jump turns down the steep, tight upper section to our meeting point in the middle of the couloir.

The bottom half of the couloir had been warming in the sun for a bit, so it was a lot more predictable and fun.  We skied down from our meeting point one at a time, making some decent turns and finding much softer snow to work with than at the top.  The bottom part of the run is ascetically appealing, giving it an elevator feeling.  The walls are tight, but the slope is moderate (about 35 degrees), so you can really get into a flow and let loose.  We each had a great run down to the bottom of the couloir, pulling out to the right above some cliffs to soak in the sun and take a little break.

We rested for a bit and contemplated booting up the west facing couloir we had skied down earlier to get back on top of Shadow, but decided against it.  We skied down to our left, picking our way through boulders until we found some chutes that took us into the northern basin of Shadow.  We traversed southeast and eventually found ourselves on the east side of Shadow Peak.  Here, we found some great snow in the trees and corn-like skiing in the sun.  We worked our way all the way down until we were back at the skin track on the moraine.  We gingerly made our way down the moraine, being careful not to get tangled in the many downed trees.

Once out in the open and off the moraine, we quickly made our way back to the Bradley/Taggart trailhead and the celebratory beverage Noah had brought for each of us.  All in all, it was a very fun day and had only taken us 6 hours roundtrip.  Looks like there is some snow in the forecast for the weekend, so hopefully we can make it out for another adventure soon.